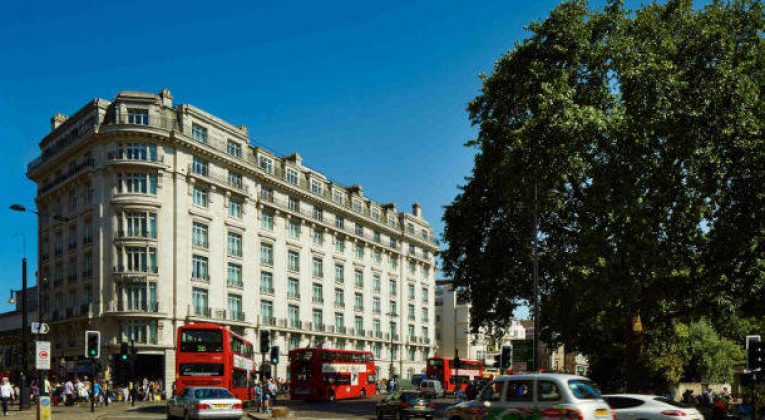 Kyle over at US blog LiveAndLet’sFly wrote an interesting piece recently about his conversation with a Marriott executive at the Freddie Awards. If what he heard is true, it’s not good news for the new Marriott Rewards/Starwood Preferred Guest programme launching in August…

To recap on where we thought we were – a couple of weeks ago, Marriott released the award chart below and then also published a list of examples showing how hotels in some key destinations would fit into the new chart. 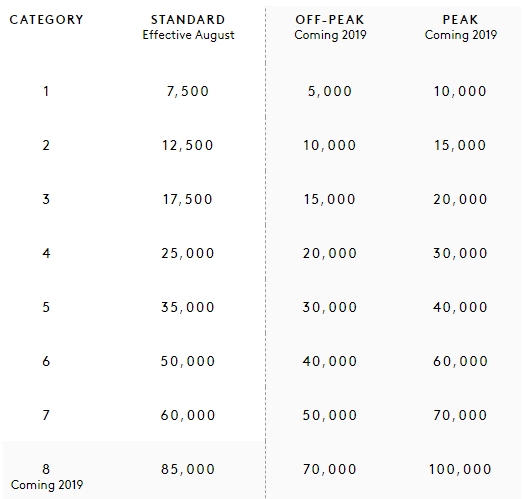 As you can see, the highest Category from August until the end of 2018 is Category 7 and hotels in Category 7 will require 60,000 Points per night. This theoretically creates a temporary situation where you could redeem Points at all the top Marriott /Ritz Carlton / Starwood hotels for a lot less than some of them currently cost – something Points/Miles enthusiasts are quite excited about.

What’s the problem then?

The (unnamed) Marriott executive seems to have said that despite publishing the award chart above and all the public info that has been made available about the new programme, Marriott actually intends to have more (higher) categories right from the launch of the new programme in August.

I admit this doesn’t make a great deal of sense to me, so it’s best to quote from Kyle’s post and interactions in the comments over at LiveAndLet’sFly directly I think:

(Kyle asked) Will those new categories and redemption changes roll out by August 1st?” Oh yeah was the response I got. The new categories which by definition will result in at least a partial devaluation of their most expensive properties will occur by August 1st. When that day happens I don’t know, but we at least have this.it’s clear they do intend to charge more than what they have posted in their new chart.

“The reps I spoke with said that they were adding new categories as of August 1st to shore up category issues for higher end properties where their cost may have dropped as a result of the new program. Their words, not mine.”

If true, that’s clearly bad news for anyone with their eye on an ultra-lux bargain, but the real problem would be bigger – Marriott would be treating us like fools and operating in bad faith.

Is this actually true?

Here is where things get a bit tricky. Obviously I wasn’t the one having the conversation and I don’t know Kyle – but I have no reason at all to think that he didn’t report the conversation entirely faithfully. That said, I don’t believe Marriott has a ‘secret’ plan.

If you read Kyle’s full report, it seems that the discussion was quite often at cross-purposes and that the exec didn’t really have a good handle on what he was being asked. That may be surprising, but it shouldn’t be really – most of us will have known people in large organisations who sometimes don’t really understand what they are talking about, but try to bluster their way through. Add the fact that this was a busy, sociable, event and you can see how mistakes and misunderstandings could occur.

Marriott has invested a huge amount of time, money and energy in managing and explaining the loyalty programme merger process. If they do intend to have higher Categories from August, why on earth wouldn’t they have just included Category 8 in the award chart from August, rather than saying they won’t be introducing it until 2019? In fact, why not just announce Category 9 or 10 at the same time too?

I’ve argued before that by maintaining SPG’s airline transfer options in the new programme, there is an effective (and attractive) ‘floor’ value for the new Points – and I stand by that argument. If the hotel redemption options aren’t compelling, more members will transfer more Points to airlines – and you can bet that will usually work out a lot more expensive for Marriott than members redeeming for hotel stays.

I’m not saying that the idea of more Categories before August is completely impossible, but I am saying that it doesn’t make any sense. I don’t see any value for Marriott in creating unnecessary ill will and mistrust in the new programme at this stage – particularly over what is really quite a fringe issue. If a few people with big Starpoints balances manage to book some great deals before Category 8 and Peak pricing are introduced next year, it’s not going to make much of a dent to Marriott’s accounts. Creating mistrust and bad feeling toward the new loyalty programme could.

What do you think? – Just a confused executive at a party, or something more concerning?