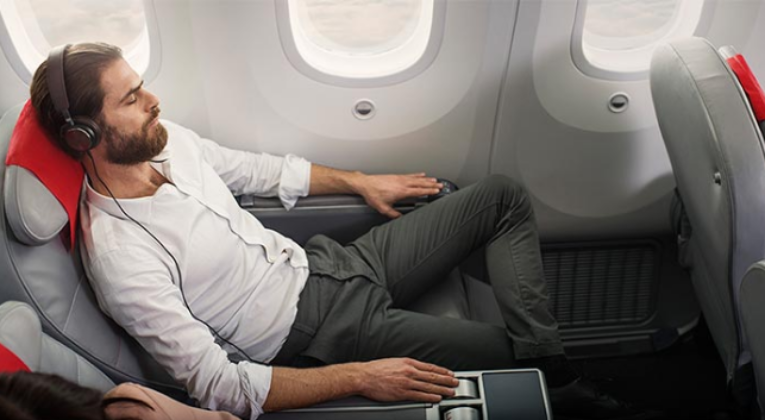 Ok, so the title might sound like an advertorial (and for full disclosure we do have a partnership with Norwegian), but this is something I just noticed myself and thought was worth sharing. We write quite frequently about Norwegian’s very low Economy fares, but I haven’t previously really paid much attention to the Premium fares, and scarcely noticed the ‘Premium Flex’ fares at all. This was an error, as for some travellers, Norwegian Premium Flex tickets could be extremely useful.

What is ‘Norwegian Premium’?

Premium is essentially Norwegian’s hybrid Premium Economy/Business Class product. You get a lot more legroom than you do with most other Premium Economy products, as well as perks usually associated with Business Class like Lounge access and 2 checked bags, but the seat doesn’t turn into a bed.

What are ‘Flex’ fares?

Norwegian’s Flex fare rules are extremely generous in my opinion:

Let’s look at each of those a bit more closely.

The most obvious benefit of a flexible fare is that you can cancel it for free and get a full refund. With Norwegian, the only condition is that you must cancel at least 30 minutes before the scheduled departure time.

Being able to change the name for free is great too, particularly for business people, if you’re not quite sure which members of your team are going to be needed.

Perhaps the most interesting feature here though is the ability to rebook for free:

Note that you can change to other flights without paying anything more, so long as the destination remains the same, you’re not switching from a direct to a connecting flight, and there is availability within the same ticket type. I’m still in the process of confirming exactly how Norwegian defines “the same ticket type”, as it seems to me that the implication here is that you could potentially book a Flex fare for a relatively cheap date and then switch it to a more expensive date, without paying more.

Even if the reality isn’t quite as generous as that, being able to change or cancel tickets until 30 minutes before departure is clearly useful and there’s another bonus to Flex tickets too – you earn 20% back in CashPoints, rather than the 2% you get for non-flex tickets.

Why is this good for business travellers?

It’s actually good for anyone who travels on flexible fares, but I don’t know many leisure travellers who do, whereas many business travellers need to.

Now that many companies have adopted ‘Premium Economy or below’ policies for most employees, Norwegian Premium might be the best quality product you can get past the expenses department – at the same time as saving the company money and earning 20% back in CashPoints for yourself.

Let’s look at a precise comparison between Norwegian and British Airways in a key business market as an example – London Gatwick to New York JFK, direct flights for a Tuesday – Friday trip. 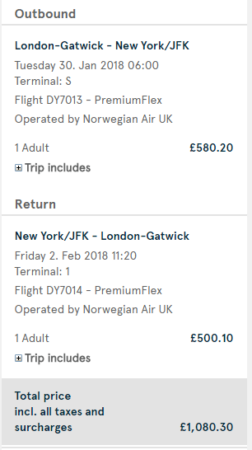 Yep, BA is charging more than twice as much for Economy as Norwegian is for Premium, for flights on the exact same dates to/from the same airports.

For reference, BA Premium Economy was another ~£500 more expensive and Business Class started at over £4,000 for a flexible ticket.

It’s worth bearing in mind that all Norwegian fares are available as one-ways, whereas the legacy carriers like BA still tend to charge astronomical amounts if you want to just book a one-way flight. The lowest one-way flexible Premium Economy flight from London to New York with BA I saw was over £1,700, whereas with Norwegian the Premium Flex fare would usually be under £600.

I’ve concentrated specifically on Premium Flex tickets here, rather than Economy Flex or non flexible Premium fares, and there’s a good reason for that.

Economy Flex fares are usually nearly as expensive as Premium Flex fares (sometimes there’s as little as £15 difference!), so opting for Premium is normally much better value in my opinion.

Non flexible Premium fares tend to be a little bit cheaper than Premium Flex fares, but not substantially so – it’s usually roughly about 10%. Remember that by booking a Flex fare though, you get 20% back in Norwegian CashPoints rather than just 2% for non flex Premium.

As long as you are likely to be flying with Norwegian again at some point and the cost difference between Premium and Premium Flex is less than ~18%, you’ll likely be better off overall opting for Premium Flex.

If you need a flexible ticket, Norwegian Premium Flex fares are fantastic value and provide lot of flexibility for far less cash than what the traditional airlines charge.