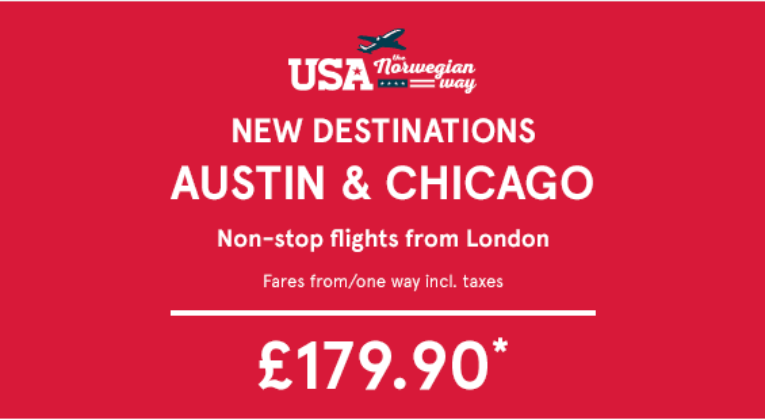 The flights are direct from London Gatwick and are due to start in March 2018.

Fares to Chicago are currently available from £179.90 one-way for the outbound, with the flights home starting at £124.90.

If you fancy splashing out, Norwegian’s Premium Class starts at £499.

as well as the ultra low cost flights Norwegian has started from Belfast and Edinburgh.

Norwegian also recently announced even more exotic destinations, in the form of Singapore and Buenos Aires.

Is Norwegian any good?

On balance, I would say definitely yes – as long as you know what to expect.

You have to remember it’s a low-cost carrier, which means you have to pay extra for food & drinks, checked baggage, etc, even on long-haul flights.

On the plus side, Norwegian has a very modern fleet and my experience of the cabin crew and the food onboard has been very positive. The 787s (which are serving these new routes) have decent entertainment systems too. As long as the overall cost of flying Norwegian was cheaper than flying BA/AA/etc, I would happily do so.

I will be trying out the airline’s ‘ultra-budget’ 737-MAX later this Summer, which doesn’t even have onboard entertainment etc, so that should be interesting…

I think it’s great to see the continued expansion from the UK. Even if you don’t fancy long haul flights on a low-cost-carrier yourself, the increased competition should help keep fares low from the traditional carriers too and that is good for all passengers.

If you can find a cheap fair though, I really wouldn’t hesitate to recommend giving Norwegian a try. Just make sure that you calculate the full cost (including food & drink, bags, etc) and go in with your eyes open about what to expect.