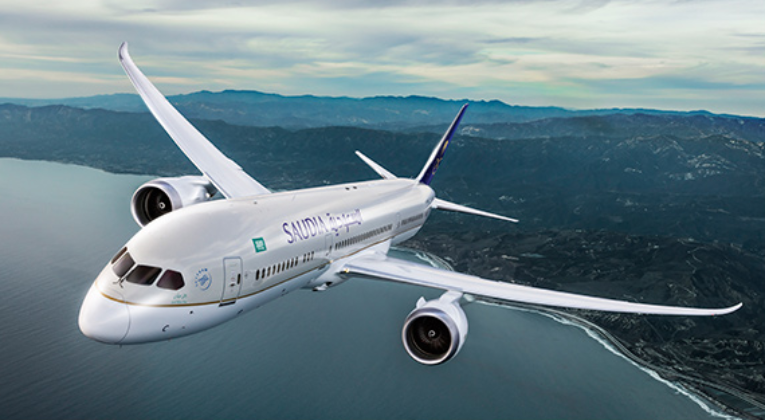 Finding the cheap travel dates on Kayak is easy, with the very cheapest fares being from Milan:

When you click through to book, the price is sometimes actually a smidge under £400:

Availability looks fantastic all the way through until 23rd March 2018. 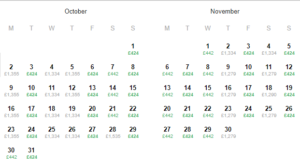 If you would rather book directly with Saudia, fares a little higher on the website, at £421. 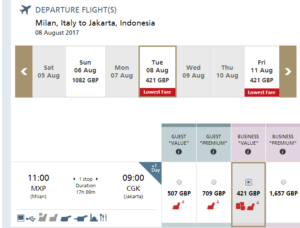 Is Saudia any good?

(Perhaps) surprisingly, yes – with some caveats.

The relatively short ~5 hour flights between Milan and Jeddah looks like they are operated by an Airbus A320 with a recliner rather than a lie-flat seat. For a daytime flight of that duration, I don’t think many people would mind too much.  We reviewed the product on a very similar route a while ago and were left quite impressed.

The ~10 hour flight between Jeddah and Jakarta is a proper ‘lie-flat’ and should be pretty comfortable. Ben over at OMAAT posted a characteristically excellent review of what (I think!) should be a very similar product here.

The most obvious downside (from my perspective anyway. 🙂 ) is that Saudia is a ‘dry’ airline, meaning they do not serve any alcoholic beverages whatsoever. For those of us who enjoy a chilled glass of champagne when flying, that might take a little bit of the fizz out of the flight…

More seriously, Saudi Arabia is obviously an extremely conservative, religious society by Western standards and that applies to the national airline too. There is a Dress Code when flying with Saudia, for instance – it’s nothing too onerous, but something to be aware of.

If you’re not an expert on Saudia ‘Alfursan’ Miles (anyone?), you can credit the flights to either Delta or Flying Blue and earn 150% of the flown distance – so you’ll end up with roughly 11,000 Miles in either  programme, worth ~£110.

The fare is amazing and flying Saudia would be an interesting experience and probably a pleasant surprise.

That said, I can certainly understand why not everyone would be comfortable flying via Saudi Arabia given the political and cultural differences.