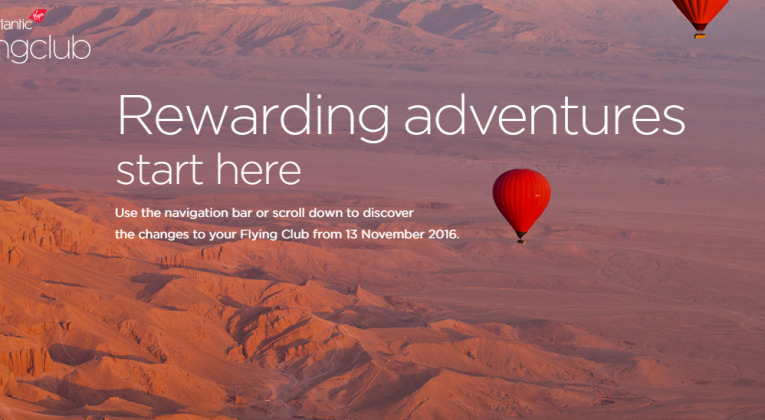 Virgin Atlantic Flying Club has just announced a series of very significant changes to how the programme works, starting from 13th November 2016.

InsideFlyer will have a full analysis of the changes later, but here are the headlines for now:

Cheapest Economy fare classes now earn 50% of flown Miles rather than 100% – this is obviously a substantial decrease, but puts Virgin Atlantic more in line with what BA offers.

Economy redemptions are actually substantially improved for the most part:

Some of these Off-Peak awards, like Johannesburg and Hong Kong, are half their current price.

Peak Economy prices are broadly similar to current prices, with some up a bit and some down a bit.

Premium Economy Off-Peak is similarly improved, with destinations in the Caribbean and Delhi requiring just 35,000 Miles Return compared to 70,000 at the moment. Even Peak prices are generally lower, with just a few destinations requiring 5,000 more Miles than the current price Return.

Upper Class is a completely different story. Even Off-Peak award prices are higher for most destinations, and Peak prices are increasing by 15,000-55,000 to everywhere, except Delhi which is 5,000 lower.

These changes are obviously mixed. It’s worth pointing out though that even the Peak Upper Class prices to most destinations are lower than what BA charges during Peak dates or on partner airlines, and the Off-Peak Economy and Premium Economy awards are now fantastic value.

The Tier Points system is changing and existing Points will be multiplied by 25 to fit the new system.

The lowest number of Tier Points you can earn per flight is 25 in cheapest Economy and the most is 200 in flexible Upper Class – so 50 and 400 for a Return.

Flying Club Silver members will only get a 30% of flown Miles bonus and Gold members 60%, compared to 50% and 100% currently.