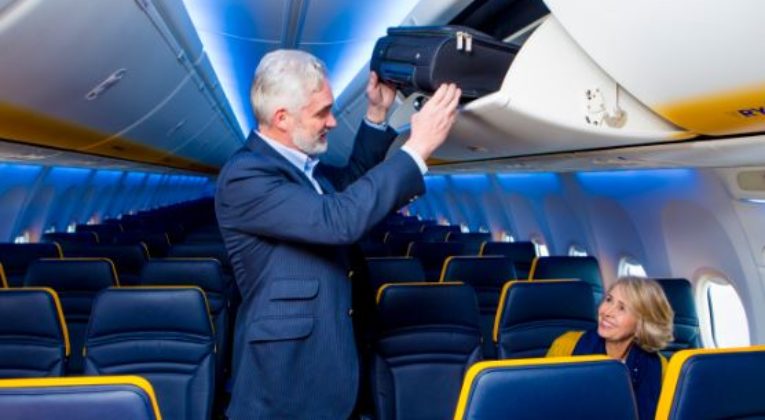 It’s easy to dislike Ryanair but, for all its flaws, it does at least help to drive down airfares across Europe. Of course, it is precisely that competitive spirit that has led airlines such as British Airways and Lufthansa to cut back on service along with their fares, much to many readers’ chagrin. Despite that, some of us remain (snobbishly?) loyal to the major Oneworld, Star Alliance and (occasionally) Skyteam airlines.

But occasionally Ryanair offers a fare that is simply too low to ignore. Or perhaps they fly direct to/from a secondary airport that is precisely the one that you need. Despite my reputation, I have quietly snuck onto a Ryanair flight once or twice recently, and decided to put together a guide to surviving Ryanair as an elite status junkie.

As an elite status junkie, you don’t want to take the coach with a bunch of students and backpackers to/from an airport hundreds of miles away from your final destination. But luckily Ryanair is gradually adding routes to more central airports. So just ignore those ridiculous airports that are misleadingly labelled.

Some of the airports you should just simply avoid (unless you are visiting the nearby countryside) are:

Once you’ve found a decent fare between two decent airports, you might get started on the booking process. Once you’ve skipped over the over-priced “Plus pack”, you should be shown the baggage policy.

Don’t even think twice about it. Click on the button and pay the £6 for Priority Boarding! Forget about being cheap. Ignore the newspaper headlines creating a fake scandal about taking away your carry-on allowance. Pay your six quid and you are guaranteed a more pleasant Ryanair experience with your cabin bags sure to join you on board. Find a different flight if Priority Boarding is sold out…

Any seat is good enough, right? Especially on a short European flight…

Not for an elite status junkie! Luckily many other Ryanair passengers are likely to be pinching pennies, leaving you free to choose the first row… 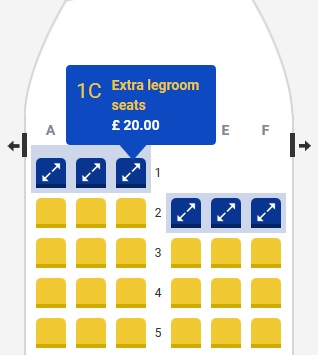 Or the emergency exit… 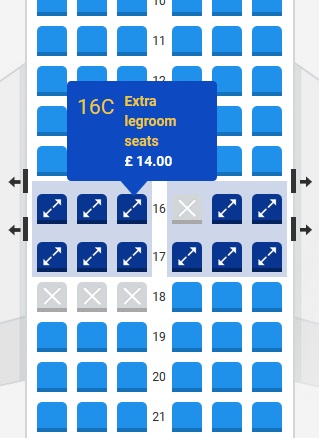 A front row seat on British Airways is going to cost you more than £20, since you’ll have to pay for Club Europe. And the emergency exit row is reserved for Silvers and Golds on British Airways. But those 600 or 1,500 tier points undoubtedly cost more than £14 per flight…

With the declining onboard service of British Airways, Lufthansa, etc. it can often be hard to distinguish between a low cost carrier and the traditionally full service airlines. But on the ground is a different matter, at least for those enjoying a level of elite status that provides lounge access even when travelling in economy. Being able to access a lounge, relax a bit, and enjoy complimentary food and drink pre-flight… that can be the difference between a relatively mild travel day and a stressful one.

Although you won’t be accessing an airline lounge when flying Ryanair, you can certainly pay for lounges operated by third parties at most major airports. Not quite as nice, but still more peaceful than the airport concourse!

Loungebuddy is a good source for information about pay-per-entry lounges. There are also a dizzying number of schemes designed to provide you access to airport lounges, in exchange for a monthly or annual fee – Priority Pass is perhaps the most well-known of the bunch.

Who needs to worry about elite status when you can fly Ryanair and:

Of course, add all of the above together and your flight might come out substantially more expensive than flying on BA or Lufthansa. But often it doesn’t, so why not piece together your own “elite” Ryanair experience…

P.S. If you’re wondering what happened to the “real” Craig Sowerby, I must have banged my head whilst skiing…  😉