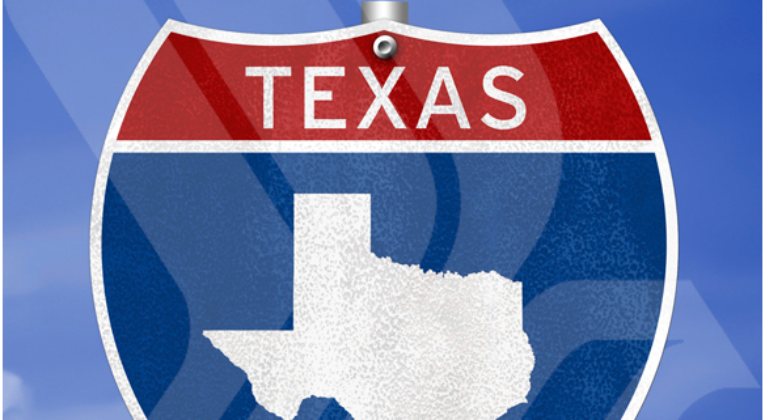 Until the end of today, you can book a Return from Manchester to Houston on Singapore Airlines for just £295.

Travel is for dates between 23rd August 2017 – 31st March 2018 and availability for the dates I checked looks excellent:

If Singapore Airlines flying direct between Manchester and Houston sounds a bit odd, it’s because the same plane actually flies Singapore – Manchester – Houston, but it has the right to pick up and drop off passengers in Manchester in either direction.

Singapore flies one of their new Airbus A350s on the route, and as you might expect from SIA, it looks quite nice even in Economy: 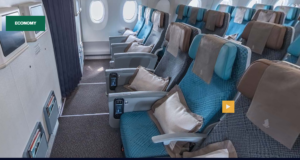 You can check out a full video about the A350 and take a closer look at all the cabins here.

If you’re not sure about Houston as a holiday destination, Singapore Airlines describes it as follows,

“Houston is a city of distinction. It’s the Energy Capital of the World and famously put the first man on the moon. Now, America’s fourth largest city is staking its claim as the most exciting metropolis in the country… This cosmopolitan city offers visitors great authentic Southern hospitality combined with modern day urban chic. Simply said, there is something for everyone!”

I’m a sucker for Southern charm so would love to visit, but even if you actually want to travel elsewhere in North America, this could still be a good way to cross the Atlantic. Domestic flights in the US (and to Mexico/Canada) are often quite reasonable using cash, and you could always use Avios or other Miles instead if that works out better.

If Economy doesn’t do it for you, Premium Economy is £830 and Business Class is £2095 from Manchester, though you can bring those prices down a bit by starting in Belfast or Aberdeen, with an connecting flight on Flybe included. In fact, Business Class from Aberdeen starts at £1,550: 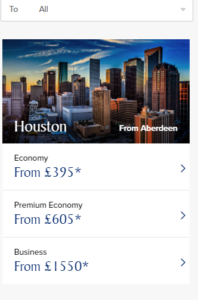 I’ve written many times before about the bargain transatlantic flights offered by Norwegian and Wowair, but this has to be one of the best value ‘full service’ fares we’ve seen in quite awhile.  Also, let’s be honest – Singapore Airlines is very likely going to be a more enjoyable way to travel across the pond than any of the alternatives in Economy.

Has anyone flown SIA’s Manchester-Houston route yet?  – What was it like?