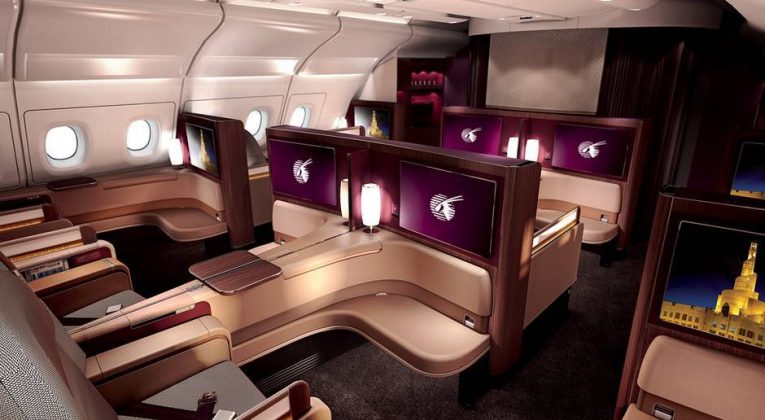 Part of being a flying champion is to know which countries and cities offer the lucrative premium cabin fares. On that list of places, Egypt almost always shines – and at the moment it stands out even more, thanks to the devaluation of its currency, the Egyptian Pound, by the central bank in an attempt to stabilise its economy.

It seems like this change is so sudden that airlines have not managed to adjust the ticket costs yet, which means for the value traveller, it is time to snag some of the best deals that we have ever seen!

Most of the deals are from Qatar Airways in Business and First Class. Economy deals are also great, though who would pay it if one can enjoy the lie-flat bed experience (plus an onboard bar on the A380) for a similar cost?

Can you imagine flying First Class to Bangkok on an A380 for just £830 return? 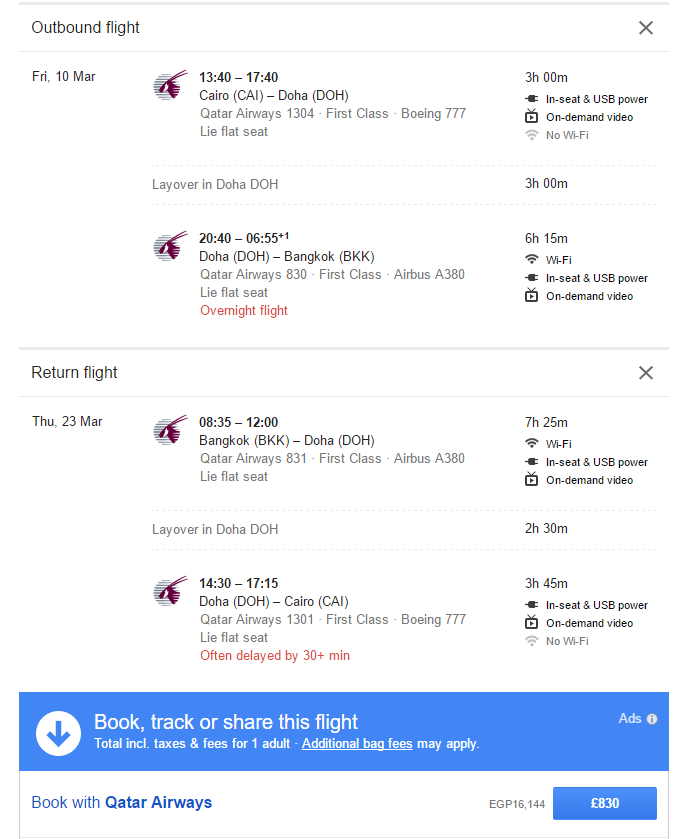 What about flying the Airbus A350 and Boeing 777 in Business and First Class to New York for just £858 return? 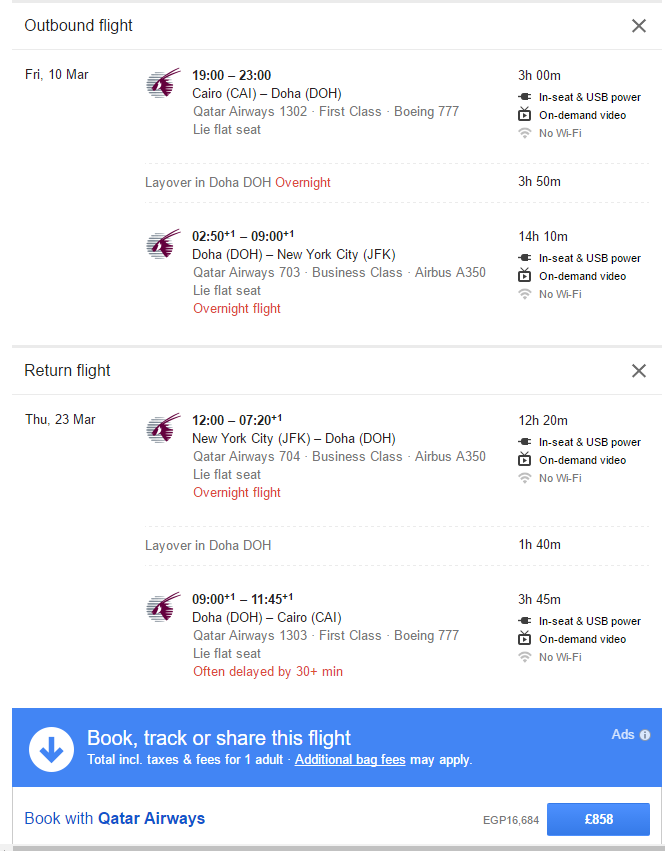 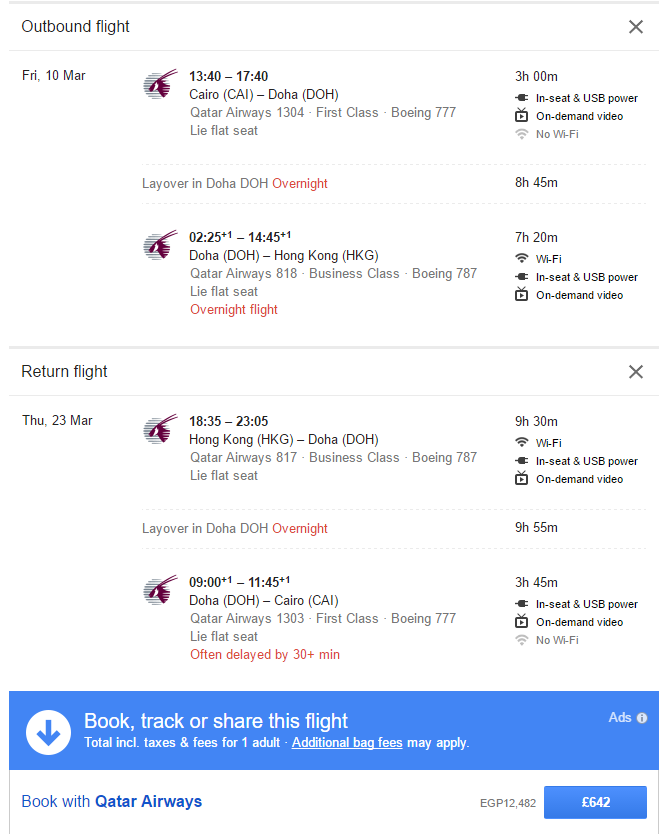 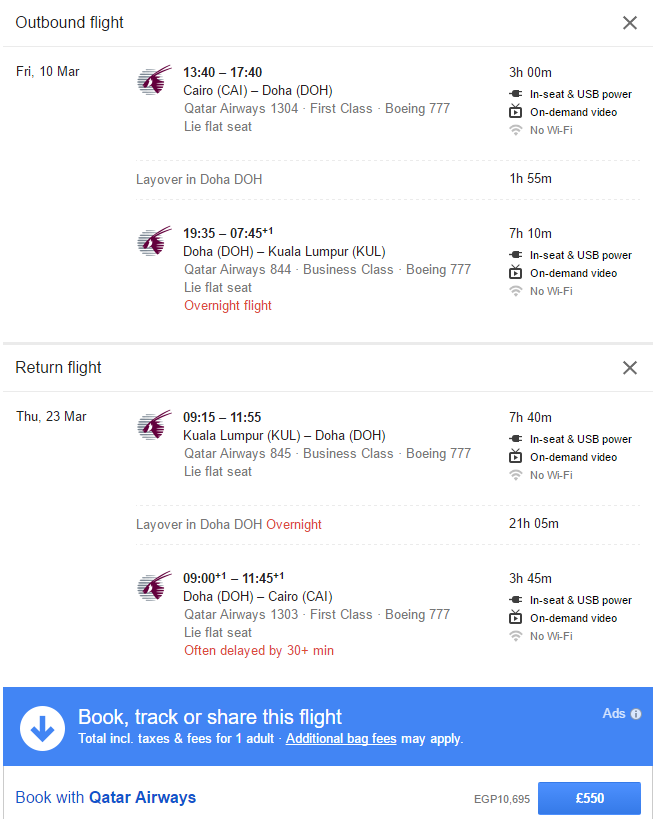 There are also deals to Australia,  Miami, Tokyo… pretty much anywhere Qatar Airways serves! I suggest you play with the destination field as there may be something that suits you!

As you can see below most of the seats are at their lowest price in 2017, after the holiday rush in December and January. 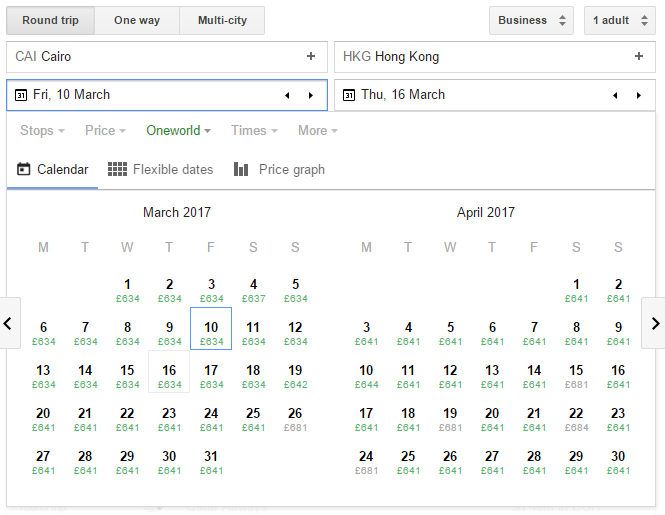 There are some cheap prices around Christmas, but they are rather limited! 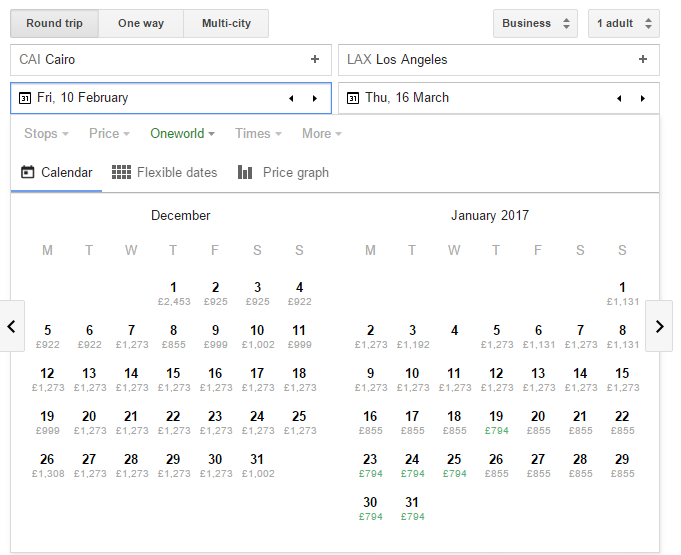 But Eygpt is far away…

Good point. Even though Egypt is a fair way away from the UK, it makes a lot of sense to reposition your starting point there.

Would you rather pay £3000 to Los Angeles from the UK when you can alternatively i) get an extra break in Eygpt ii) enjoy the latest airline seats with the fantastic Al Safwa First Class Lounge and iii) save at least £1500?

You will also earn lots of Miles by starting your journey in Cairo. If you credit long-haul Business Class flights to British Airways Executive Club, you should  earn at least 20,000 Avios: which is enough to enjoy a one-way flight to Moscow on British Airways‘ B787 which I wrote about in my previous article.

Don’t forget you will earn BA Tier Points for the booking as well. Using the same example between Cairo and New York (JFK) you will earn a total of 440 Tier Points (60+160+160+60), which is almost 75% of the way towards the mid-tier Silver level with BA!

If you have been thinking about trying out the latest Business Class product from Qatar Airways, then now is your chance to do so. Note that the deals I covered above are valid for one-way flights as well. Regardless of which premium class deal you select, you will also still be entitled to use the Al Safwa Lounge as Qatar Airways markets its short-haul premium cabin as First Class. Remember you may need a visa to enter Eygpt, so I urge you to check this before booking (they are not expensive to get but will take some time…).

Again this is a great opportunity to grab some real deals while earning more airline miles and retaining status – it may not be the shortest routing, but trust me it’s worth it!

Hello, all! I am Samuel, from Hong Kong. As a long-term resident of Scotland, I am both a University student and a frequent international traveller! I started the miles and points game back when I was 13 as I needed to travel between Hong Kong and Scotland for school and holidays. As time goes by I have learnt a lot on how to travel in style without paying much for the privilege, and I hope my contributions will boost your knowledge - and allow you to become a travel champion too!